Capitol eyes was a large tire-woven fence installation visible on the east side of the Capitol Drive overpass in the late summer months of 2013. A group of community members worked together at beeBques to reduce donated inner tubes to strips, and weave them through the chainlink fence.  A picture of a former Harambee neighbor’s smiling eyes was superimposed onto the fence, which became a stencil for many people to weave tubes into the fence to create a large set of eyes, which were each 4’ tall by 18’ wide.  These eyes greeted west bound traffic on Capitol Drive and created a silhouette in the sky as the sun set.  From the artery itself, one could look east in the morning through the eyes to see the rising sun.  The eyes belonged to a young 12 year old girl who came and supported many events on the artery before her family left the neighborhood due to a violent incident adjacent to their former Harambee home.  After removed, the eyes were re-installed at another location for 6 months of the 2013-2014 winter at Blue Dress Park, looking over the the Beerline Trail atop the Holton Street viaduct.  Rather than being recreated with innertubes, these were made of several strings of solar powered LED light’s; though were invisible by day, the eyes beamed brightly, long into the cold winter nights. 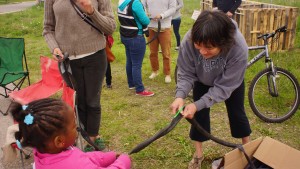 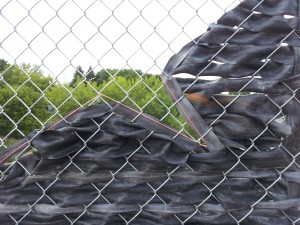 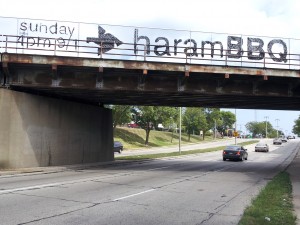